news > In the Texas House, property tax legislation is being handled with a different speed — and tone

When the Legislature’s priority property tax reform bill was rolled out by a House committee Wednesday, it was met with a tenor and pace that differed markedly from the more contentious proceedings in the Senate.

Absent the quick tempo and heated exchanges that marked the upper chamber’s committee hearings on the legislation, a panel of state representatives deliberated its bill for nearly 12 hours, taking expert and public comments without proposing amendments. The proceedings were the latest sign of the lower chamber’s approach to the priority property tax package — which the chair of the tax-writing Ways and Means Committee said they would “fully understand before we get into the debate and discussion.”

That, he said, “is how we have discussions in the Texas House.”

During the Senate committee’s proceedings, public testimony was largely limited to two minutes — a strategy designed to allow everyone who wished to testify the opportunity to do so, according to the office of state Sen. Paul Bettencourt, R-Houston, chair of the committee.

As the Ways and Means Committee meeting wore on Wednesday, some witnesses complained that homeowners hadn’t been called until well into the evening and that many had departed before their turn came.

But the thorough approach was set early in the day by committee Rep. Dustin Burrows, R-Lubbock, the committee chair who began proceedings on the reform bill by saying he hoped the 11-member panel would hear comments and “talk about ideas that can make the bill better in either direction.”

After, “the committee can collaborate and can work and try to come up with a bill that is right,” he said. “[We’re] not just trying to get something across the finish line as quick as we can.”

The Senate tax committee passed its version of the property tax reform bill, with amendments, earlier this month. It has not yet been debated by the full upper chamber. As drafted, both versions of the legislation would require that cities, counties and special taxing districts receive voter approval before increasing property tax revenues 2.5 percent more than the previous year. Revenue from new developments would not count toward the 2.5 percent threshold.

Burrows seemed open to other rates Wednesday, but he explained why he filed the bill at 2.5 percent.

An election trigger could be tied to a price or wage index — or based on “simple math,” Burrows said.

Currently, voters can petition to have an election if revenue growth surpasses 8 percent, a figure supporters of the legislation say was set during a period of high inflation in the 1980s.

The reforms are a big-ticket item for state leaders. Though they are unlikely to reduce individual tax bills — a concern for residents who say their incomes have not kept pace with rising property values — they could tamp down the rate of a jurisdiction’s property tax revenue growth.

The legislation also proposes a battery of modifications to how properties are appraised, with an aim of making the process more transparent and less subjective.

Still, as Burrows noted Wednesday, the 2.5 percent election trigger has “captured most of the headlines,” and several witnesses were asked Wednesday to help identify a more palatable number.

“Do you think 8 percent is where it ought to be, or do you think it should be lower?” Burrows asked Amarillo Mayor Ginger Nelson.

“I think we’re engaging in that conversation with you guys,” she responded, listing a number of factors she thought should be taken into account.

Two dozen big-city mayors proposed using a formula to tailor the trigger to each jurisdiction, in a letter to the committee chair dated Feb. 26. Six mayors testified on behalf of the group, stressing they were remarking “on” the bill — a neutral position — not against it.

“The Mayors came in with solutions this time because they just said NO last time,” he said. “That’s progress.”

Despite the generally placid tone Wednesday, the hearing exposed some of the party-line fissures that have animated the property tax reform effort so far. Mayors were questioned by GOP lawmakers about why having an election trigger would force them to cut their budgets. Municipal leaders said population growth and unfunded mandates were tying their hands. And many homeowners, who supported a trigger at 2.5 percent, spoke of their difficulty paying rising tax bills on top of other expenses.

Near 11 p.m., the Speaker of the House, Dennis Bonnen, R-Angleton, walked through the hearing room to greet lawmakers and watch the proceedings.

In 2017, property tax proposals left the House and Senate at an impasse during both the regular and special sessions. The lower chamber proposed that an election be triggered at 6 percent revenue growth, while the upper chamber pushed for 4 percent.

In a move Bettencourt has jokingly called a “compromise,” Gov. Greg Abbott pitched a 2.5 percent rate in advance of the 2019 session. A poll from Quinnipiac University, released this week, found voters largely supported the idea of requiring local governments to get voter approval before “increasing property taxes” more than 2.5 percent.

Still, lawmakers’ public support for the 2.5 percent threshold has appeared to wane. Republicans have cast the figure as a starting point. Prominent Democrats on the committee — state Reps. Trey Martinez Fischer, D-San Antonio, and Rep. Eddie Rodriguez, D-Austin — have said the figure is a non-starter.

“For the number now to shift downward by a point and a half to 2.5,” Martinez Fischer said, “my natural reaction and response to that is, ‘Well, my 6 becomes 7.5.’”

And a major component of the reform package has yet to be unveiled. The bulk of property taxes statewide are levied by school districts, with state dollars flowing in after local revenue has been accounted for. The property tax reform proposal has inserted placeholder language for schools, as lawmakers’ wait on sprawling public education bills to be filed.

“Everybody seems to want to live this policy through the lens of 2017,” he said. “I take the mayors at their word that they’re going to work hard, they’re going to come up with a collective solution. I take the chairman at his word that he wants our input and is hoping to make this bill better.” 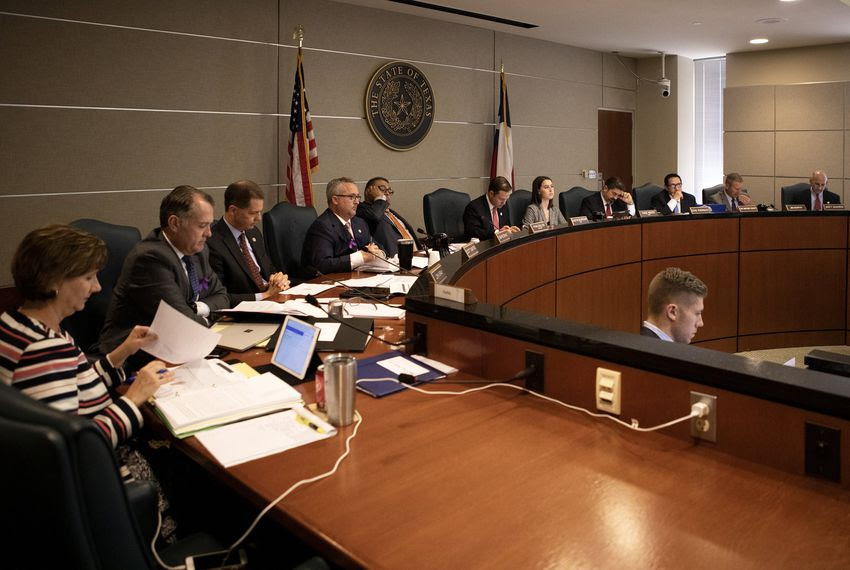 Members of the House Committee on Ways and Means listen to testimony on HB 2 on Feb. 27, 2019. Miguel Gutierrez Jr. / The Texas Tribune