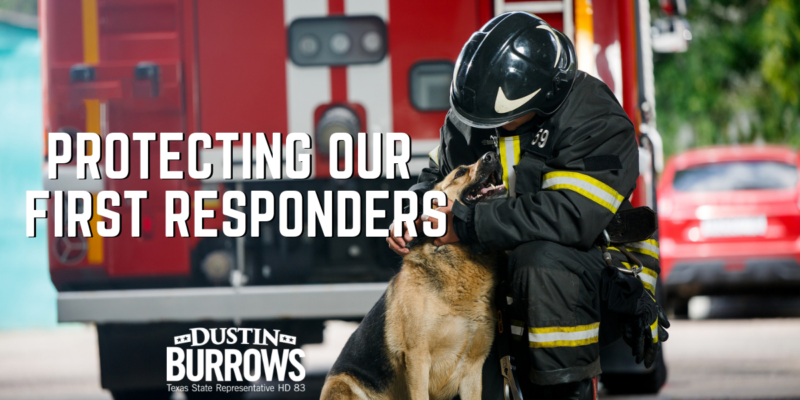 This proposed legislation would amend Section 415.021 of the Labor Code to add sanctions, administrative penalties, and other remedies, including attorney’s fees, for administrative violations by self- or collectively insured municipalities obligated to cover eligible workers’ compensation claims. The amount of the administrative penalty shall not be less than two times the total amount of benefits payable in connection with the first responder employee’s claim.

Rep. Burrows said, “The current workers compensation system for firefighters and police officers in Texas is plagued by delays and abuse. Private insurers have largely been replaced by cities that are either self-insured or in a risk pool. This has resulted in widespread denials and delays by the cities when it comes to nearly any on duty related injury or illness.”

Rep. Moody said, “Our first responders are provided workers compensation coverage in the case of an injury or illness that has occurred because of their duty. The system is doing a bad job at providing this now and HB 1521 would go a long way to push the reform needed. Abusing fire fighters and police officers by putting them through a process of denial and bureaucracy is not what was originally intended.”

Rep. Meyer said, “We must ensure that Texas first responders have access to fair and uniform workers compensation benefits consistent with the rest of the insurance industry.”

Rep. Longoria said, “The workers’ compensation system has failed too many Texas first responders, including my constituent, Homer Salinas, a Mission firefighter and cancer survivor. Homer won four rounds of workers’ comp proceedings to get his cancer treatment covered, yet he was sued by the City of Mission to reverse prior decisions in Homer’s favor. House Bill 1521 is an important step toward ensuring that our hero first responders are not denied the medical treatment they have earned through their service under Texas law. Mr. Salinas should be focused on his health and protecting his community – not fighting for benefits he’s earned.”

Rep. Leach said, “First responders are critical to the safety and security of our Texas communities. We must treat them fairly when the hazards they encounter every day in the line of duty result in injury or illness. HB 1521 clarifies current state law and holds municipalities acting as workers compensation providers to the same standard as all other insurers in the State of Texas.”

The proposed legislation is supported by the Texas State Association of Fire Fighters (TSAFF), which includes more than 18,000 professional firefighter members in 182 Texas communities.

Studies show firefighters are at increased risk for cancers and other illnesses caused by on-the-job exposure to hazardous materials. For example, the International Agency for Research on Cancer (IARC) has cited the higher risks of kidney cancer that firefighters face. Chapter 607 of the Texas Government Code, Texas’ “presumptive” law, covers related medical care, according to the Texas Department of Insurance. The statute provides that Texas firefighters are entitled to receive the medical treatment they have earned as they risked their own lives protecting others.